Check Your Ego at the Dojo Door

I am a 2nd degree black belt. I got there by always checking my ego at the dojo door.

I started karate at 47 to have an activity I could do with my then 7-year-old son and 5-year-old daughter.

At the beginning, I was bad, really bad – the bottom quarter of any given class.

I did not have the physical aptitude for karate. My balance was not good. My rhythm and timing – a foundation of all karate movement – was herky and jerky.

I also did not have the mental aptitude for karate. Having been a wrestler, rugby player, and marathoner, my instinct was always to try to drive and overpower.

But, karate is a finesse sport. It is strategic – maximum impact with minimum exertion.

Despite not being very good, I was intrigued by karate.

Maybe it was the precision of the sport. Or, the focus on being present (“mind on the mat”). Or, the lure of recognized achievement where I could earn one belt after another.

I cannot say for sure why it stuck. But I can say with certainty what led me over several years to earn a first, then second degree back belt.

Simply put, it was because I had no ego around learning karate.

As humans, we are often hierarchical rather than egalitarian in our learning.

Before we can begin learning, we do a lot of credentialing.

➡ Who is teaching us?

➡ Who else recognizes them?

➡ How experienced are they?

➡ Where do they sit in the hierarchy?

At my dojo, I was an egalitarian learner (probably because of my karate limitations). I tried to take something from every single class and conversation.

Sure, I learned from the head sensei and the black belts.

But, I also learned from teenage classmates who picked things up quicker, from women classmates who were better at kata, and from my son who had greater natural aptitude.

It was precisely because I was an “egalitarian” learner that I was able to progress from one belt to another, despite my limitations.

A black belt requires fluency and agility in a broad and diverse body of knowledge.

Listening to many different points of view regardless of their position helped me develop a  fluency in responding to any situation in a way that aligned with my style.

It was only after my black belt test that I realized that being an egalitarian learner is an essential quality of top performers in any field.

Top performers do not focus on asking: “Has this person earned the right to teach me?”

They ask instead: “What can I learn from this person, regardless of their station?” 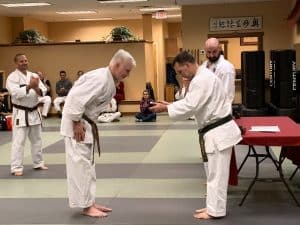